Although worldwide literacy rates are on the rise, there were still 750 million illiterate adults around the globe in 2017, according to UNESCO Institute for Statistics.

Many of these people now have access to smartphones but, without being able to read or write, it is challenging for them to use the technology to its full potential.

In response, Cornell Tech students created litOS, a mobile operating system designed to enable low-literacy readers to use their smartphones to communicate and use the Internet, without having to read or write.

Before coming to Cornell Tech, Raoul Nanavati, Johnson Cornell Tech MBA ’18, started a mobile game company for the Indian market. “That’s when I was exposed to the needs and capabilities of smartphone users in India,” he says. People would constantly ask his team about the phone’s capabilities, how to perform basic tasks, and how to use new applications. He realized that there should be a way to teach people how to use their phones by making an easy-to-use operating system.

To better understand the needs and challenges of their potential consumers, the team conducted user interviews with 20 people of low literacy levels in India. “We got to speak to them through video conference and ask probing questions into what phones and applications they use, how they bought their phone, and how they set it up and continue to use it,” says Raoul Nanavati, “These qualitative interviews informed our features and applications in the system.”

In response to this research, they created a text-free user interface with illustrative icons, internet-accessible apps, a contextual voice assistant that shows the user the most relevant action on that screen, and the ability for someone to remotely access the system to help? The team “developed litOS using agile methodologies and worked in weekly sprints using our user feedback to constantly tweak and improve the user interface as we developed,” says Raoul Nanavati. “Our focus is on how to make it a contextual and helpful system instead of a query-based system which assumes the user understands the basic concepts of the internet and content,” he adds.

“[We wanted to] address the fact that complete independence won’t be reached right away,” says Jai Nanavati. “The remote companion application that lets friends and family remote into the phone and help with specific tasks came directly from the fact that we were fielding requests.” They made additional changes to the prototype based on additional user research. Because they couldn’t go to India during the semester, they visited senior citizen homes and immigrant organizations in New York to test their prototype with people with low literacy or low tech literacy. They also sent their prototype to colleagues and friends in India, Bangladesh, and Ivory Coast to conduct research tests and asked them to film their interactions. 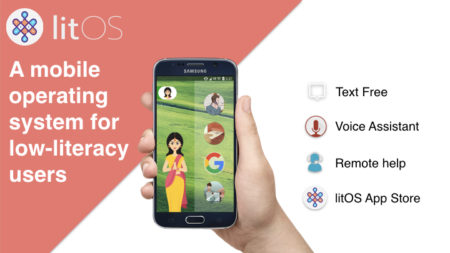 From Classroom to Company

After winning one of four Startup Awards, Jai and Raoul Nanavati are moving to India to set up operations, travel to rural areas to conduct more user research, and test it with users to incorporate their feedback. Max Shatkhin will continue working for the company part-time in New York City.

“Understanding how to create a narrative around our product was the single most valuable takeaway from Startup Studio,” says Raoul Nanavati, “It was particularly important for us because our problem is not something people are exposed to in America. Understanding how to communicate the problem to other people helped us understand the problem at a much deeper level than we perhaps would have if we built this in India.” They also credit their confidence to the constant feedback they received from people in the industry like venture capitalists and entrepreneurs.

“Through this user research, our aim is to have a product that works flawlessly with any demographic across India,” says Jai Nanavati. At that point, they will look for more investment and work with smartphone manufacturers with the goal of having their first customers by the end of 2019.

While they are starting this journey in India, they are very clear that their goal is to provide the next billion users a way to have the same access to information and communication that everyone  reading this can experience today. The team has been moving fast and recently announced Indrani Medhi, a researcher at Microsoft Research, and leader in the research of text-free user interfaces for low literacy users, will join their advisory board.