Break this Catch-22 and Close the Tech Gender Gap

Despite being the most advanced economy in the world, the United States faces a crisis: Much of its labor force is not advanced. While the need for skilled tech workers is growing rapidly across industries, American colleges are only producing 52% of the graduates needed to fill those jobs. At current rates, we will only have 17% of the needed tech workforce by 2026.

As a nation, we are getting this wrong. To make matters worse, women earn just 19% of college degrees in computer science and information technology, even though the percent of all degrees being awarded to women is at a record high of 58%.

We owe it to ourselves to change these troubling trends, not just for the sake of parity (which is exceedingly important), but because it makes economic sense.

Neither New York City nor the U.S. will win the global competition for technology talent if we don’t empower half the population to take a seat at the table. Women only make up 26% of the computing workforce. We therefore must get our undergraduate women interested in pursuing tech careers—and changing a culture that for years has told them tech is not a field for them.

This is particularly needed in New York. Women from local public institutions such as the City University of New York—the largest and most diverse public college system in the world—face real hurdles as they try to navigate their way into the tech ecosystem. In a place as progressive and tech-centric as New York, this should be unthinkable.

A key obstacle for these young women is that they are not competitive when they try to land a paid tech summer internship in their junior and senior year. That significantly reduces their chances of landing a great tech job when they graduate.

Why can’t they get access to these coveted summer tech internships? Employers report that they don’t have any experience on their resumes—something more privileged freshmen and sophomores typically get from unpaid apprenticeships and weekend hackathons or by having a network of connections that get their foot in the door. CUNY women can’t afford the time for these unpaid experiences because they are working one or more part-time jobs to help their families and to pay for college, and they don’t know anyone on the inside to help them. It’s a classic Catch-22. The result? Less than 10% of CUNY women who apply for summer tech internships in their junior and senior years actually land one.

Solving this problem won’t happen overnight, but some efforts have made progress. One is to place students into host companies for a paid internship that is brief so it is low-cost and low-risk for the companies—yet transformational for both the students in terms of the credential and the companies for exposure to the next generation of diverse tech talent. 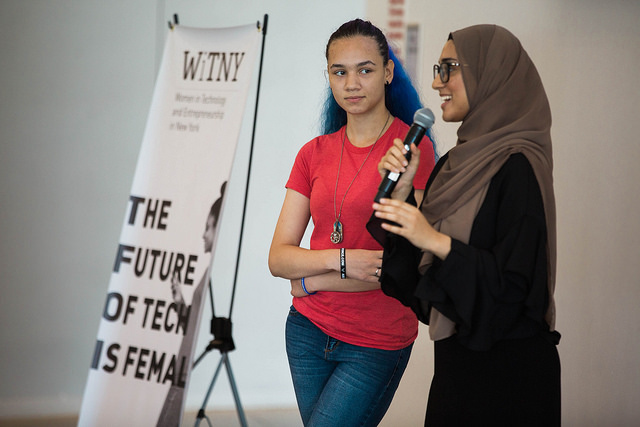 One model for addressing this challenge is the WiTNY initiative, a partnership between New York City, Cornell Tech and CUNY (and funded by industry partners). It brings together the diversity of CUNY, the resources of Cornell Tech and buy-in from the city and forward-thinking companies with a commitment to generating a strong women-in-tech pipeline.

Its Winternship program—a paid internship of two or three weeks in January for freshman and sophomore women in tech—makes it easy for a company to open its doors to these young women in order to get that incredibly valuable first tech experience. Winternships can change the trajectory of these young women’s lives while also energizing the host company’s internal operations. Last year 46 companies gave opportunities to 177 freshmen and sophomores. In the end, 54% of these CUNY women landed 10-week paid summer tech internships in the city, compared with less than 10% without the program. The Winternship opened a pathway into tech that appealed to the host companies, energized their employees and changed the lives of the students.

Making New York City the destination for women in tech will require many changes to our schools, companies and culture. From the top down, we have to create an environment that gives young women a way in to the industry and the confidence to master it. The Winternship program isn’t a total solution. But it’s an excellent start.

3 Tips to Foster an Inclusive Environment in Technology