Yes, says a team from Cornell Tech – but for functional fashion.

There’s no shortage of people who dress up their babies, bunnies or puppies. But what about robots?

Besides a stray feline Roomba, very few people are investing energy into putting clothes on robots. Researchers from Cornell Tech and NYU say that now’s the time to think more actively about when, how and why we would dress them, now that robots are likely to be popping up more regularly in our factories, stores, offices and homes.

The team just published a paper that outlines some of the considerations for dressing robots in a way that helps them serve their function.

“Rather than being merely for decoration, clothing can serve a practical purpose and be closely tied to what robots actually need,” says Cornell Tech graduate student Natalie Friedman, co-lead author on a new paper about the project alongside NYU lecturer Kari Love, which they presented at this year’s Designing Interactive Systems conference. “Adding easy-to-read physical elements can make the function of a system clearer and more intuitive for people to interact with.”

While human clothing is largely marketed for its aesthetics, it obviously serves a range of more practical functions. One, for example, is protection. Jackets protect us from rain and snow; boots, from mud and rocks; stain-resistant jeans, from unfortunate wine spills.  Clothing could serve a similar purpose for robots in certain lines of work: say, a firefighting robot who may need a fireproof vest for one scenario, and a waterproof vest for another.

Some garments also serve as a way of providing information about the wearer’s role. A robot waiter handing out hors d’oeuvres at a wedding might wear a white shirt with a black bowtie. Clothes can be designed to highlight a robot’s potential actions, like vertical stripes on a shirt that make it easier to see when a robot is rotating. More complicated outfits might have color-coded buttons that pair to matching button-holes to help people understand how to correctly put them on a robot. 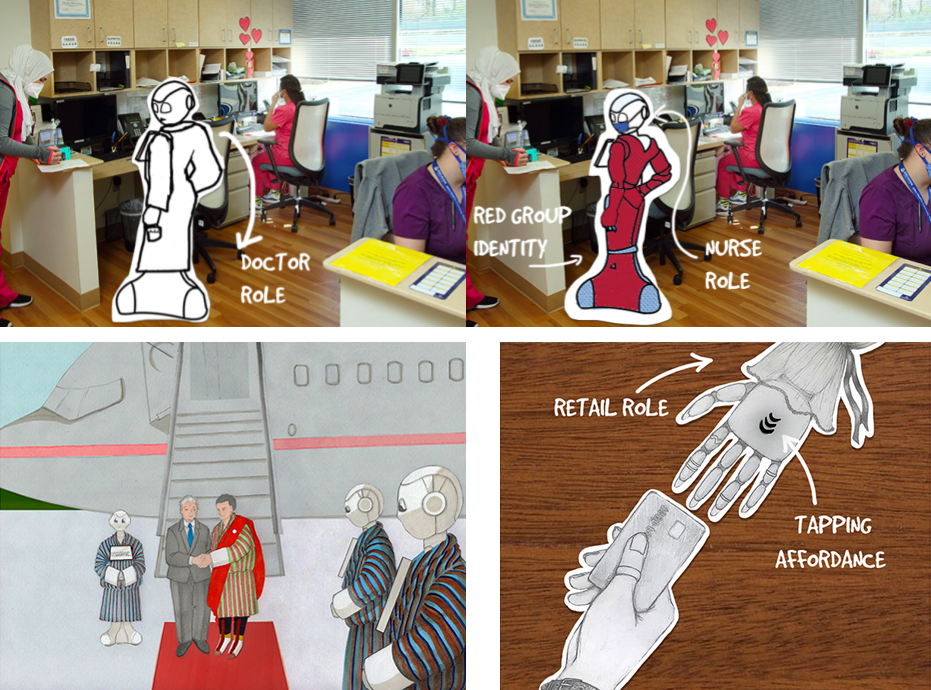 Indeed, Friedman points out that it’s not as simple as just slapping some human clothes onto a robot. Robots are diverse and versatile, and some of their core attributes and advantages need to be considered and leveraged. (They don’t sweat, for example, so that may mean using certain fabrics that we’d never put on people.)

“I think this work is important to helping engineers and technologists understand the functional importance of aesthetics and signaling in design,” says Cornell Tech professor and co-author Wendy Ju. “It’s not ‘just fashion’ – what the robot wears helps people understand how to interact with it in ways that are critical to safety and task execution.”

As a next step, Friedman says that she will curate a fashion show of robots wearing clothes while continuing to develop her framework about potential functions of clothes for robots.

The project was supported in part by Backslash Art.