Students Cornell Tech’s MS in IS Connective Media program at the Jacobs Technion-Cornell Institute have turned their academic research into a real product to help tackle a global health issue. The team has developed a digital system for tracking biological samples used in diagnostic services in Lesotho, Africa.

In Lesotho, an organization called Riders for Health uses motorcycles to access remote health facilities and collect biological samples. The samples are then delivered to laboratories and tested for diseases such as HIV/AIDS.

However, the paper-based system traditionally used to track samples is vulnerable to human error. Mixed-up or lost samples can lead to delays, causing considerable stress to patients, or worse — a vital diagnosis being missed altogether. 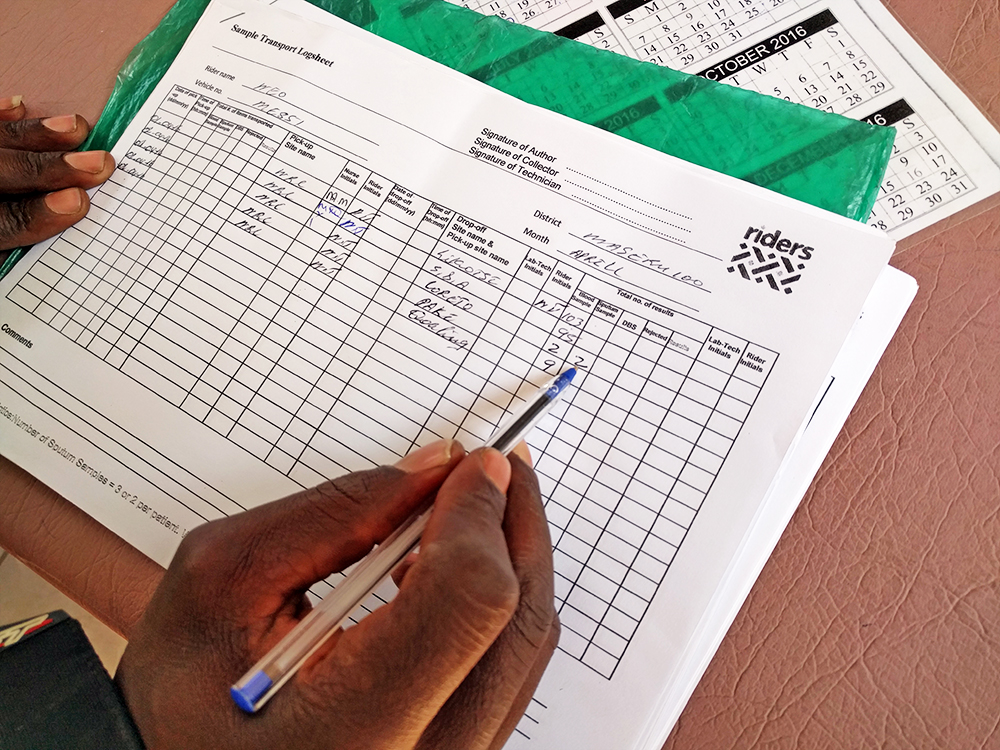 Led by Assistant Professor Nicola Dell, the students worked in partnership with The Clinton Foundation HIV/AIDS Initiative (CHAI) and the Lesotho Ministry of Health to develop a digital system to replace the outdated paper-based one. Their innovative solution is expected to be deployed nationwide in August after successful completion of a mini-pilot.

Student researchers Sean Herman and Xiaoyang Ma, both MS in IS, Connective Media, ’16, believe that a collaborative approach was key to the success of the project. They also made sure their solution was tailored to the local context.

“We got in touch with the Riders for Health,” Herman said. “We spoke with people at health facilities and laboratories, and some Ministry of Health staff, basically doing interviews and talking to them about their workflow.”

The system they delivered digitally tracks biological samples — such as blood and sputum — as they travel in two directions: first from medical facilities to laboratories, and then back to the medical facilities when the results are returned.

Riders collect samples using a mobile app to scan a bar code on a form. The form also has an adhesive copy of the bar-code, which is peeled off and attached to the sample. The form and the sample are then linked to the same bar-code to be tracked. 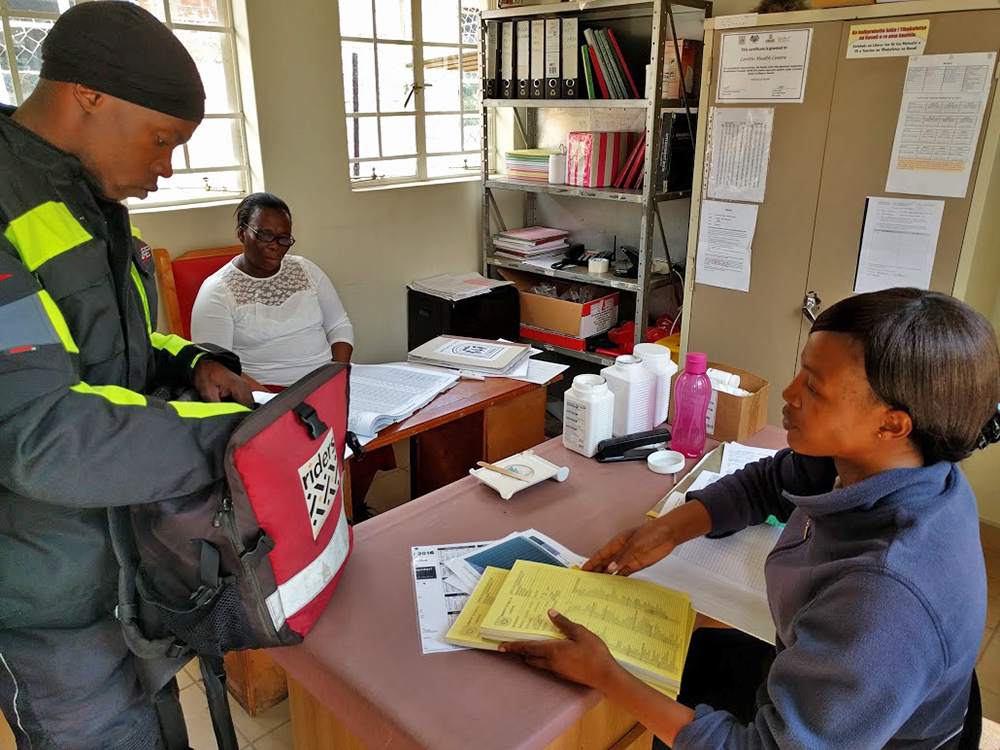 Ma developed the mobile app and data-entry system for the project. Mindful of local challenges, she also built on software specifically designed for low-connectivity environments.

Meanwhile, Herman worked on the back-end server that collects the information. A web front-end then makes the data available for users. Once the team had developed the system, they carried out a mini-pilot, tested the workflow, fixed any bugs and created training manuals.

Not only does the digital tracking system cut down on lost samples and spoiled forms, it also allows problems to be fixed efficiently when they do occur. For example, if results are sent to the wrong facility, the mix-up can be quickly identified and resolved. In the past, such an error might have led to long delays, or worse — cases in which people never received their results at all.

Herman explained that this had a two-fold negative impact on patients, not only personally frustrating individual patients, but also discouraging other people in the area from being tested in the first place. These are huge issues “when you are trying to increase access to diagnostic services for patients who may have spent a day trying to travel to this remote health facility,” Herman added.

As part of the project, Herman traveled to Maseru, the capital of Lesotho. There, he met with information services professionals at the Ministry of Health and visited the National Reference Laboratory, where he was walked through the diagnostic workflow. Then at a local health center, he observed samples being handed off and results being delivered. His personal highlight? Meeting and talking with the Riders for Health themselves. 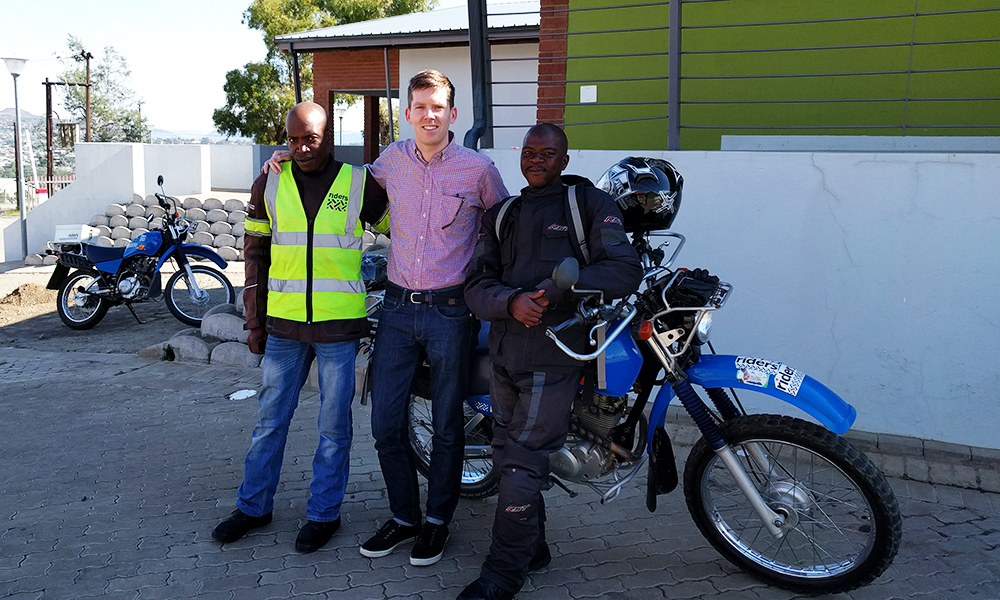 Herman explained that the team always intended the system to be transitioned to theMinistry of Health in Lesotho. He thinks that meeting face-to-face with the people who will be running the system, and understanding any doubts they may have, was invaluable.

“One of the biggest challenges from the very start has been getting a clear picture of all the facilities that we would be servicing,” Herman said. “Seeing them engage with us and invest in the success of this project was really exciting.”

Cornell Tech’s focus on research with real-world impact was one of the things that attracted Herman and Ma to the Connective Media program in the first place. Assistant Professor Dell, whose research focuses on creating and deploying technologies to empower underserved populations said that by partnering with local organizations, Herman and Ma were able to deliver a system that does exactly that.

“We are not health professionals and the health expertise that they bring to the table is hugely important,” said Dell. “We know about technology and how to build technical systems, but they know how those systems might fit into the broader health landscape that exists in Lesotho.”