Facing of the Bolotowsky mural prior to removal.

Removal of the Bolotowsky mural from Goldwater Hospital.

Removal of lead and adhesive from backside of mural canvas.

Rugolo mural in conservation studio — after removal but before conservation/in-painting began.

Swinden mural in conservation studio — after removal but before conservation/in-painting began.

Swinden mural in conservation studio — after removal but before conservation/in-painting began.

Cornell Tech’s campus on Roosevelt Island will have technologically advanced and future-facing facilities, but it will also have something else: a glimpse into US history, and a critical link to the island it calls home.

That’s thanks to a team of conservators who carefully removed three historic murals from Roosevelt Island’s Coler-Goldwater Specialty Hospital and Nursing Facility just before its demolition in 2014, and who will reinstall them within the new Cornell Tech buildings.

The murals were by Ilya Bolotowsky, Albert Swinden and Joseph Rugolo. 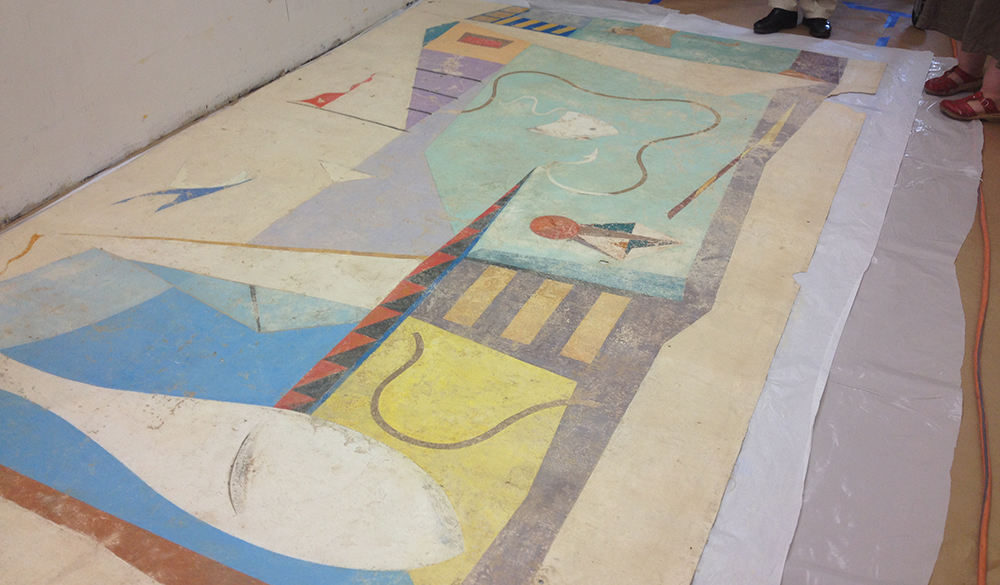 Rugulo mural in conservation studio — after removal but before conservation/in-painting began.

Bolotowsky, the best known of the three, was a protégé of Piet Mondrian and leading early abstract painter known for creating a sense of order and balance in his paintings. What makes the mural he created for the hospital so unique, according to Keri Butler, deputy director at the Public Design Commission of the City of New York, is that it was commissioned by the Works Progress Administration (WPA). The WPA seldom commissioned abstract works of art, Butler said, but Bolotowsky’s work was championed by a fellow abstract artist Burgoyne Diller, who also happened to be project supervisor of the New York City WPA/FAP Mural Division.

Removing these murals was no walk in the park. In their original incarnation, all of the murals by Bolotowsky, Swinden and Rugolo had been installed on walls in three of the building’s 32 circular-shaped rooms. In these circular rooms, patients would congregate, get fresh air, and look out through the windows to the river — the idea being that sunlight and fresh air supported convalescence. A total of eight murals were commissioned for these spaces, though only four were ever completed. 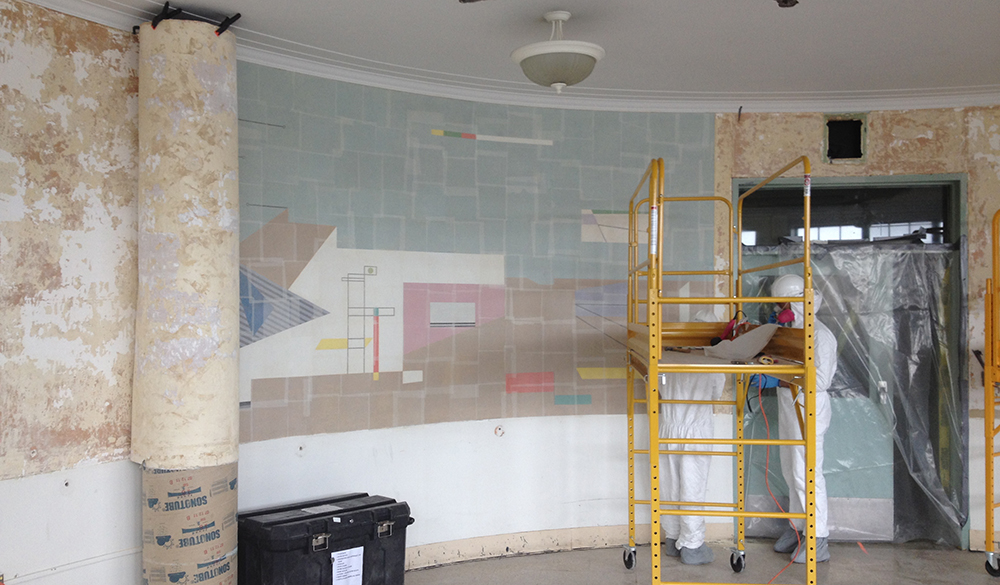 Removal of the Bolotowsky mural from Goldwater Hospital

But over the years, these rooms were repainted many times. Eventually, layer upon layer of interior house paint obscured the locations of the murals themselves.

Then, with demolition of the hospital slated for late 2014, Cornell and New York City worked together with a team of conservators on a kind of scavenger hunt, scouring the hospital to find these works—Bolotowsky’s, which had been restored in 2000, was easier to find than the other two. Though conservators knew a fourth mural may have existed, after searching each of the 32 rooms the group determined that the mural was not within any of them.

Butler describes the discovery process like something out of a detective novel. “We were in one of these day rooms, and a conservator asked if it was okay to remove the light switch cover. So we got a screwdriver and removed the cover — there was canvas there! It was a revelatory moment.”

Once all of the murals had been painstakingly secured, they were chemically stabilized and, finally, restored off-site at a conservator’s studio, according to Stephanie Lee Wiles, director of the Herbert F. Johnson Museum of Art at Cornell University. Where paint was missing, conservators filled in the blanks. 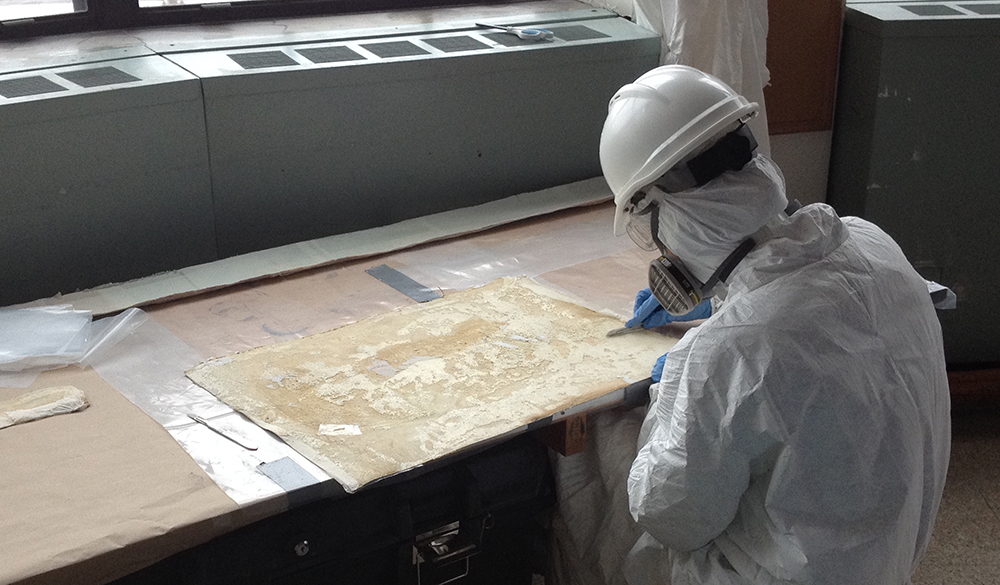 Removal of lead and adhesive from backside of mural canvas.

“All of these New York City murals serve as reminders of an unprecedented government-funded initiative that provided essential work and income to artists, and supported the artistic careers of many otherwise overlooked abstract artists,” said Wiles.

The murals, she hopes, will connect students and visitors to the history of the island. She also noted a conceptual overlap between Bolotowsky’s style of abstract painting, which was then avante-garde, and Cornell Tech’s mission in the world today: “In this brand-new building, [Bolotowsky’s murals] represent thinking about new horizons — and new directions that technology will take us.”

Now that these paintings will be accessible to so many, Butler said she hopes they’ll inspire dialogue about not only the past, but also the future of public funding for art in America. “I can’t even imagine another time when the United States government had such an impact on cutting-edge American art,” she said. “I hope that students will look up and wonder what these murals are about, and that the murals provide inspiration and an uplifting experience.”

COVID-19: The story that defined New York City and the world in 2020

The Case For One Covid Passport

Read the story about 2020: Year in Review