Have you ever listened to a playlist that’s supposedly been ‘Made For You,’ but has only left you wondering if the platform ‘knows’ you at all?

Algorithmic streaming recommendations can be quite useful when seeking artists similar to those you already listen to, but using those generated playlists to discover a wide range of new content can be difficult. What if you wanted to listen to what your friends were listening to, but they all have different music tastes from your own? If you can’t remember their favorite band or song’s name, you’ll be out of luck.

Four Cornell Tech students jumped at the chance to innovate when they noticed this lack of diversity and social connection. Wishing that there was an easy in-app way to share what they were listening to with friends, the team came together to design a potential new feature: Spotify Groups.

Chan Baik and Shuhan Zhang, both Johnson Cornell Tech MBAs ‘20,  Bobo Liu and Jae Min Cha, Masters of Engineering in Computer Science ‘20, and Max Klein and Rebecca Gill-Clarke, students from the Parsons School of Design, were matched up with Spotify during their BigCo Studio course where students learn how to innovate within a large company. “It was exciting to get Spotify since we already use it and had many different ideas,” said Zhang.

To start, the team gathered input from a diverse group of regular Spotify users on any problems or limitations they encountered while using the platform. “There is already a huge built-in user base getting on to listen to music. There wasn’t a need for extensive research to capture a niche market,” said Liu.

After speaking to various users, the team realized they had to stay focused on one stand-out idea, which was to help users find more diverse content through their friends. “Our interviews with users showed that they didn’t always necessarily want Spotify’s recommendations on what to listen to. They said they’d like to have an additional collaborative feature to share music among friends,” said Zhang.

Together with Spotify stakeholders, the team assessed various solutions alongside Spotify’s business objectives: the number of monthly active users, strategic importance, and new user growth potential, as well as the idea’s long-term technical scalability and feasibility. After brainstorming some ideas, the team decided on integrating a ‘Groups’ feature into the Spotify interface. 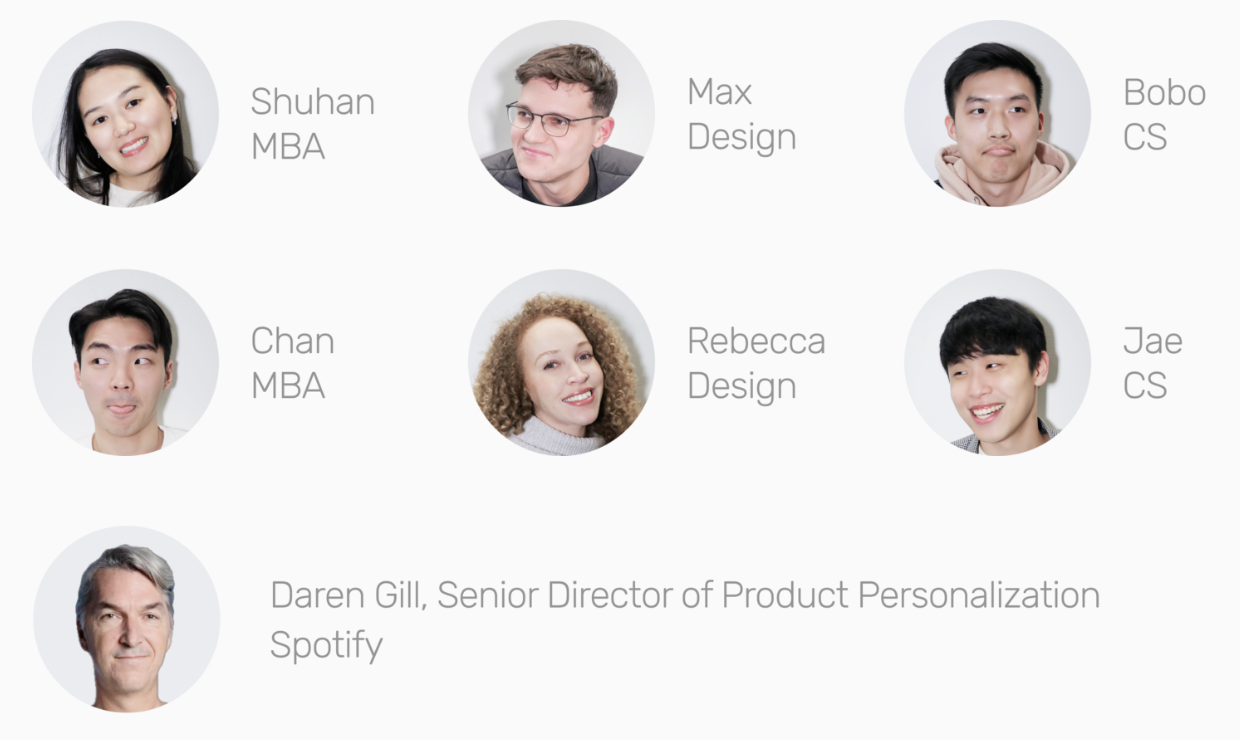 The idea of Spotify Groups is to offer users a social and collaborative environment, similar to those on other popular social media platforms, to drive music and podcast discovery based on the tastes of their friends and family. A user can aggregate a curated slate of content for others or open it up for collaboration, somewhat akin to the way playlists are created on the platform. Users can also know what their friends are listening to, and more easily share their favorites as well.

With this idea in mind, the team worked with advisors from Spotify to chart out the potential places to display Spotify Groups in-app. Klein and Gill-Clarke helped visually design the team’s ideas, all while integrating them within Spotify’s brand, design specs, and internal framework. “We were lucky with our designers Max and Rebecca — they were very detail-oriented, even down to the pixels,” said Baik.

If implemented, the feature will be situated next to other toggle options on Spotify, such as ‘Music,’ and ‘Podcasts.’ Clicking on ‘Groups’ will populate the feature offerings in a way that becomes more individualized the more a user curates and creates preferences and friend circles.

It will also introduce interactivity for users, both between other users and with the content offered on the platform. 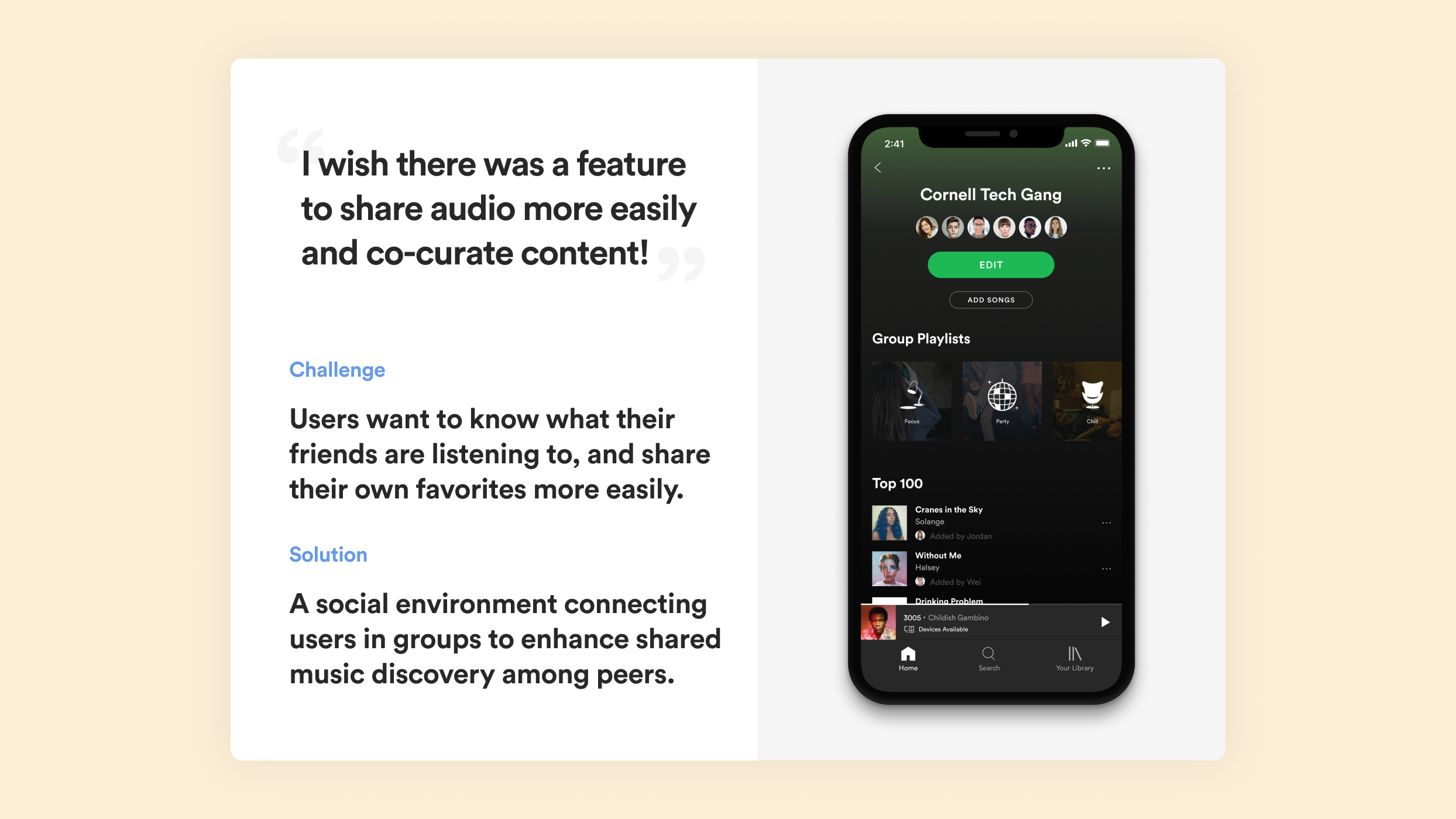 “BigCo Studio gave us good tips on how to efficiently interact with very busy company advisors. That, as well as our team members, is what made us succeed with the project. And the good news is that the nature of BigCo projects is that no one owns the idea, it is public,” said Zhang. Since the project is open-source, a dedicated person or team at Spotify can work on building the project uninhibited by high costs or holdouts based on ownership.

A workable version of Spotify Groups could be in the hands of users soon. “There were talks about offering this as an intern project, but we have to wait and see. Hopefully, they make it in the near future. We’d all use it ourselves,” said Liu.