Turning on the lights. Making a phone call. Moving from one side of the room to the other.

These actions are such basic parts of everyday life that most people perform without so much as a second thought. But for the mobility impaired, something as simple as flipping a switch is anything but simple.

While many people living with quadriplegia are incapable of moving their arms and legs, they often do have control of one of the most sensitive and versatile muscles in the human body: the tongue. And so, five recent Jacobs Technion-Cornell Institute Masters in Information Systems, Connective Media graduates created Pallette, a device that fits like a mouthguard and empowers people to control everything from wheelchairs to home appliances to video games — all by moving their tongues.

“The idea is to bring independence to people with quadriplegia by enabling them to use their tongue to control their surroundings,” Oliver Hoffman ‘16 explained. “We’re tracking tongue gestures and connecting to surrounding technologies allowing people to control them in ways they have not been able to before. “

Pallette sprung from an HCI (Human-Computer Interaction) course in the spring of 2015. “We had an open-ended assignment to design any interface we wanted,” Daniel Levine ’16 said. “Our team wanted to create something meaningful and unique.”

“The Connective Media program, in my opinion, is about taking technical expertise and an understanding of people, and affecting some sort of change,” Levine said. “The goal is to do social good.”

In particular, Levine was motivated to achieve social good in the realm of rehabilitative technology. 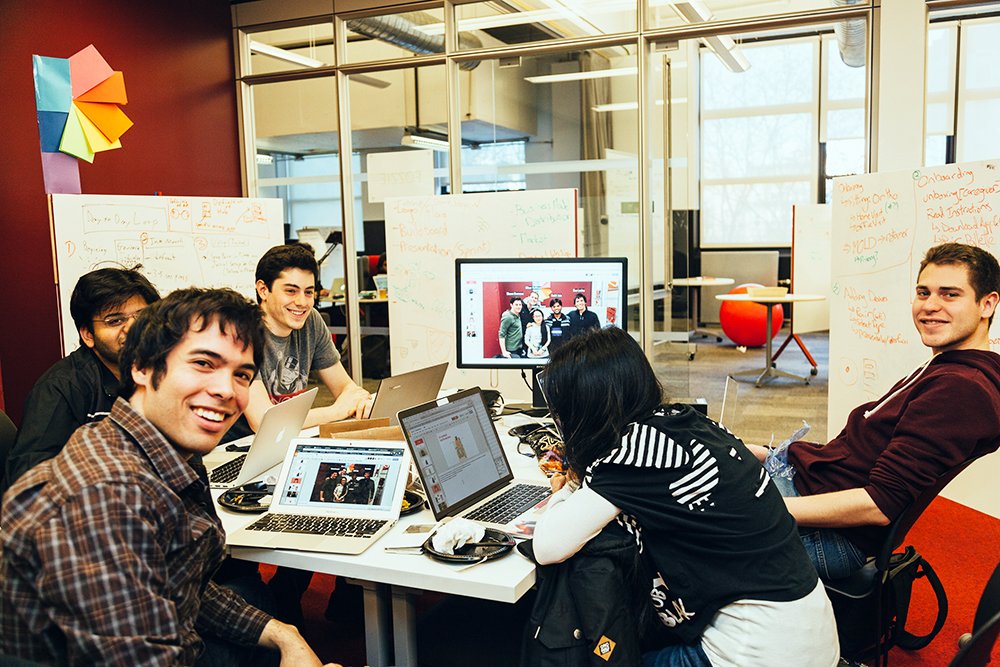 “Growing up as a competitive gymnast, there would be times where you’d be pretty injured and appreciate the ability to walk,” said Levine. “I’d be walking home wondering, if you couldn’t move your limbs, how would you move around in a way that didn’t disrupt your identity or your privacy?”

Teammate Rohit Jain ‘16 brought a unique perspective from his work in virtual reality. “People keep complaining that they don’t have hands in virtual reality. We are not able to bear this handless experience for 10-15 minutes,” he said. “But there are people who live like that every day of their life. Even though technology has made such advancement, some people have been left behind.”

Collectively the team, which also included Shawn Bramson ‘16 and Joanna Zhang ‘16, had an interest in finding mobile, discreet methods for the mobility-impaired to move around and interact with surrounding technologies.

Already existing methods like Sip-and-Puff, an assistive technology that lives outside the face which people breath into a straw to control wheelchairs, and voice-activated technologies that let everyone around you to hear of your commands, provide the mobility impaired with independence, but not much privacy. The team aimed to create an assistive technology that also preserved privacy and the ability to define one’s identity. They believed they could do this, by concealing the device inside the mouth and operating it with the tongue. 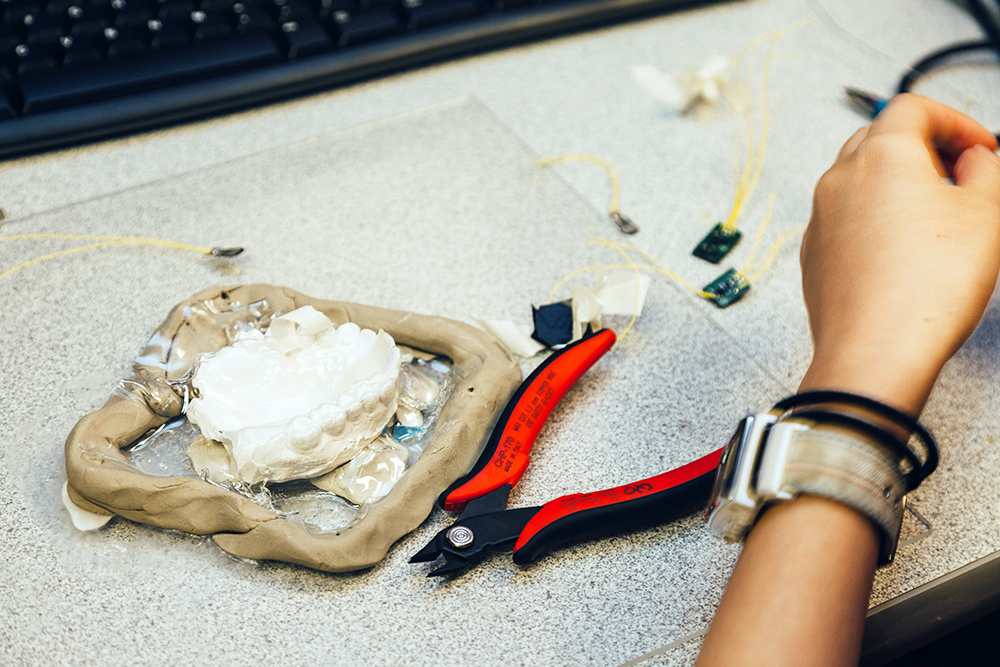 In the early days of Pallette, the team began by embedding an IBM Thinkpad joystick into a sports mouthguard. They played with many mouth-friendly mediums, even at one point repurposing red Babybel cheese wax to embed electronics and comfortably fit the mouth.

“Then we moved to orthodontic techniques where we used dental acrylics,” Levine said. “We bought the bubble gum stuff you get at the dentist and created soft, plaster molds and created retainers around them.”

The hardware has already evolved from having four flat, force-sensitive resistors, which people had to push like buttons, to infrared tracking that reads the tongue’s movement without touch, putting less strain on the muscle.

Zhang and Levine are currently spending the summer working at Cornell Tech to create an open source version of the product, which would enable other people to make their own. At the moment, Pallette’s goal isn’t to go to market, but rather to put the technology into the world so that the mobility impaired can access it as soon as possible. 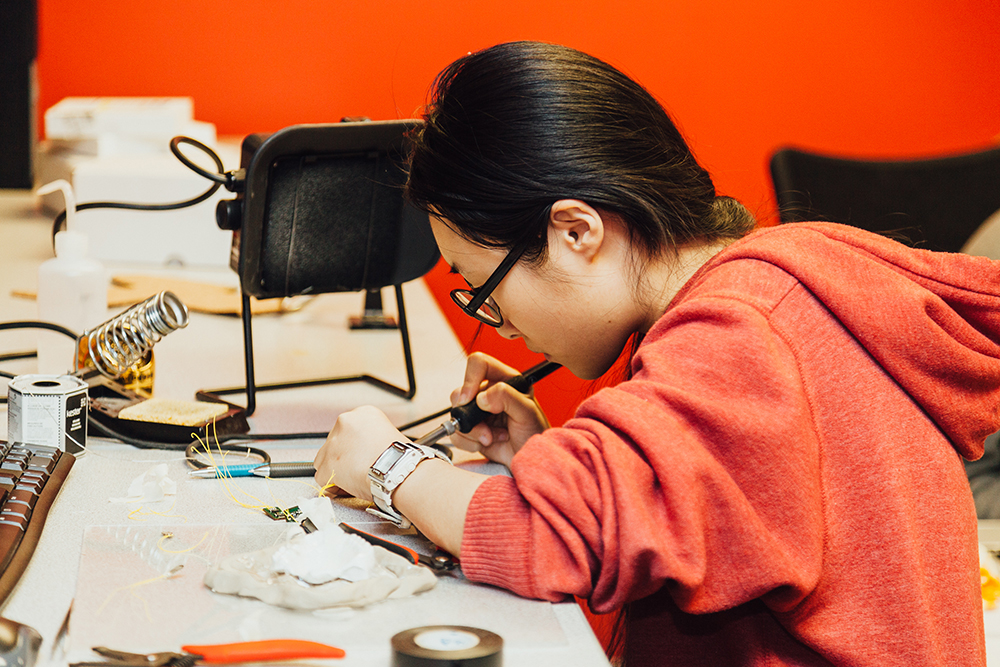 Levine recalled a meeting the Pallette team had at the hospital in which patients expressed emphatic interest in using the product in their everyday lives.

Although Pallette’s main goal is to build independence for the mobility impaired, its possibilities are endless.

People without disabilities, including members of the U.S. military, expressed interest in Pallette when the company participated in TechDay New York.

“I hope it’s used in everyday life,” said Zhang. “Like a remote control for things around you.”

And for Levine, “I’d also love to see this used in art or experimental things. Like, controlling balloons or flying around drones or painting. It’s like telekinesis with your tongue. 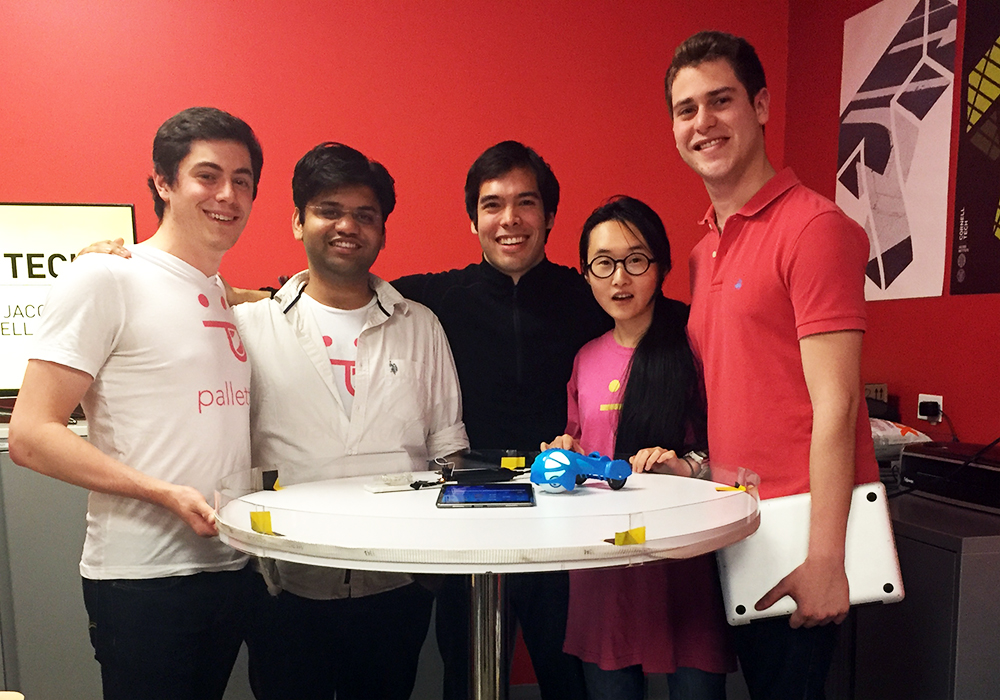 Look Them Up: Young Alumni in Tech

By Linda Copman As Cornell Tech celebrates its 10th year, the school has …
Read the story about Look Them Up: Young Alumni in Tech